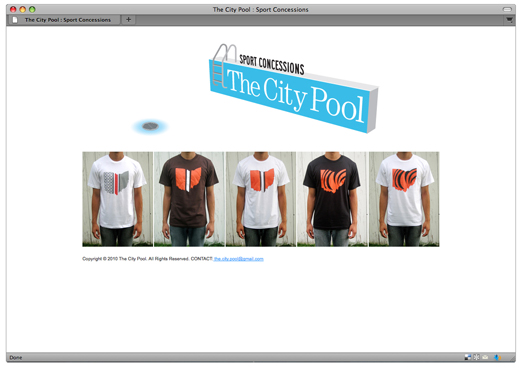 I mentioned this little project of ours a little while back. Now that football season is in full swing, I thought it would be appropriate to share our new site. Andrew had the idea for these shirts a long time ago but we never had the means to have them made. While we were living in NYC, we screen printed some prototypes ourselves which worked well enough to print a few. Finally, we had shirts professionally printed and they are available here. Women’s sizes are currently being printed and will be up for sale soon!

One of our newer endeavors, The City Pool has been a long time coming. It’s really Andrew’s baby, but I’ve been helping him out. If you are into sports, Ohio, and t-shirts please check out our new store.

I am proud to say that we have some crazy talented friends. Our great friends Toby and Angela came to visit from NYC a couple months ago and one day we sat around and made Onesies for Q. I’m pretty sure he has already outgrown them by now (he could probably squeeze into one with a paper diaper but not his bulky cloth ones), but these will definitely be going into the memory box! We used plain white Gerber Onesies and TeeJuice fabric pens. 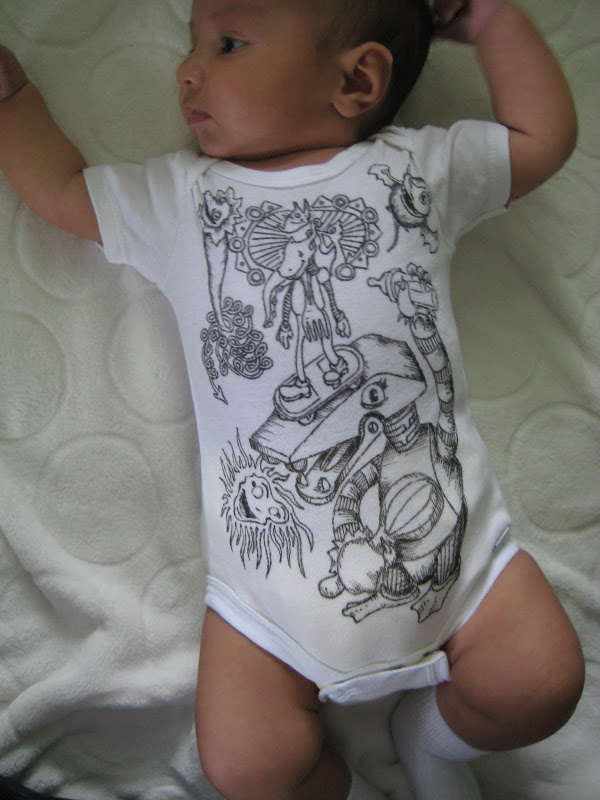 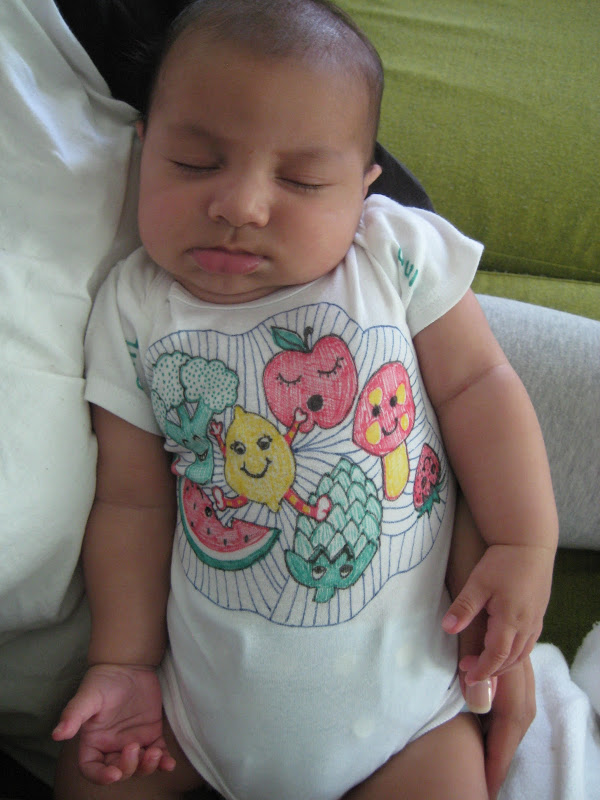 Drawing by Angela Carlucci (the same lovely lady who made our wedding papercut!)

P.S. Andrew, my brother and I all made a Onesie, but I haven’t gotten good pictures of those yet. Will post one day… 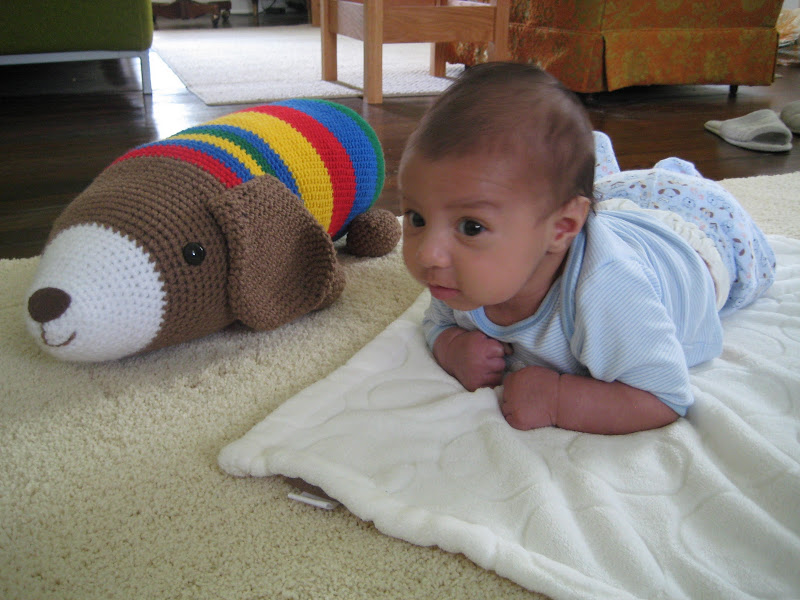 In the months before Q was born, both Andrew and I had a surge of productivity. I think it was our collective subconscious preparing us for a drought. We’ve been fortunate that Q is a good sleeper now. After his bedtime and before he wakes is our free time and both Andrew and I have been able to work on some new projects.

I figured an update is in order for the projects that we worked on before Q arrived.

I should preface this update with the fact that the majority of the time Q wears Fuzzi Bunz cloth pocket diapers. We were lucky enough to have generous family and friends who bought us these fancy pants (since they can be on the pricey side).

In making the wool diaper covers I was preparing for the possibility that we might not be gifted any fancy diapers. In that case we would have to use the more cost friendly pre-fold cloth diapers that require a water resistant covering. There have been times when we ran out of the pocket diapers and had to use the pre-folds as a back up. Despite my initial skepticism, the wool covers work unbelievably well. The amazing thing about wool is that it repels water and absorbs moisture at the same time! If you want to read more about the wonders of wool, you can read more here.

Here is Q sporting a pair of diaper covers made from a repurposed wool sweater that I felted in the washing machine: 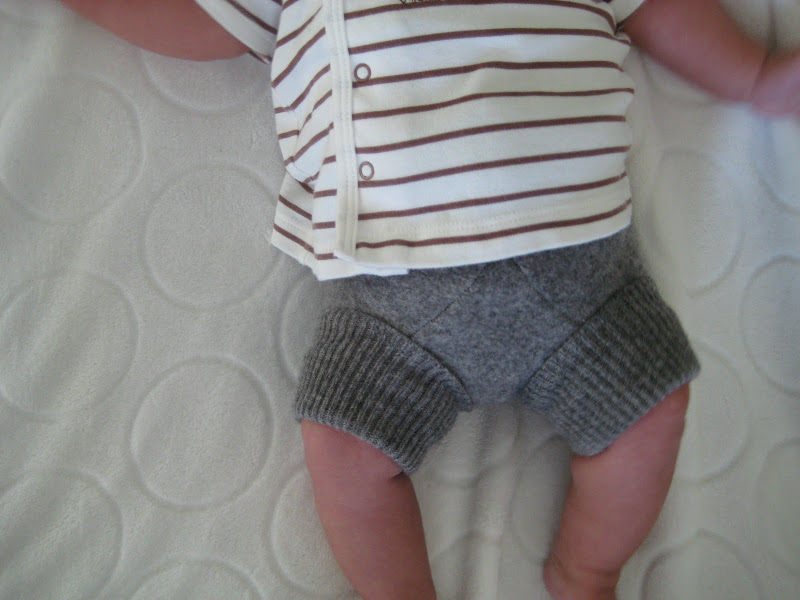 The crocheted cover and the knitted cover were also a success! The crocheted ones are still a bit large, but he’s already outgrown the Vanilla cover, so I’m in the process of knitting a larger size.

I’ve been hearing about Freezer Paper stencils for awhile now, but never got around to trying it. This is one of those crafts that sounds fun but time consuming, so I’ve always just filed it away in my brain for a later date. A little while ago, I came across the blog Ambrosia Girl and her great tutorial for Freezer Paper stencils. She made cute shirts for her adorable boys, and this inspired me to make shirts for my nieces and nephew for their birthdays. Using their initials, I made the designs on the computer then printed them onto the Freezer Paper. Of course, I made them super complicated so the cutting part took some time. But in the end, I think they turned out pretty well. This is a great way to make one-of-a-kind prints. Here is F in his shirt: 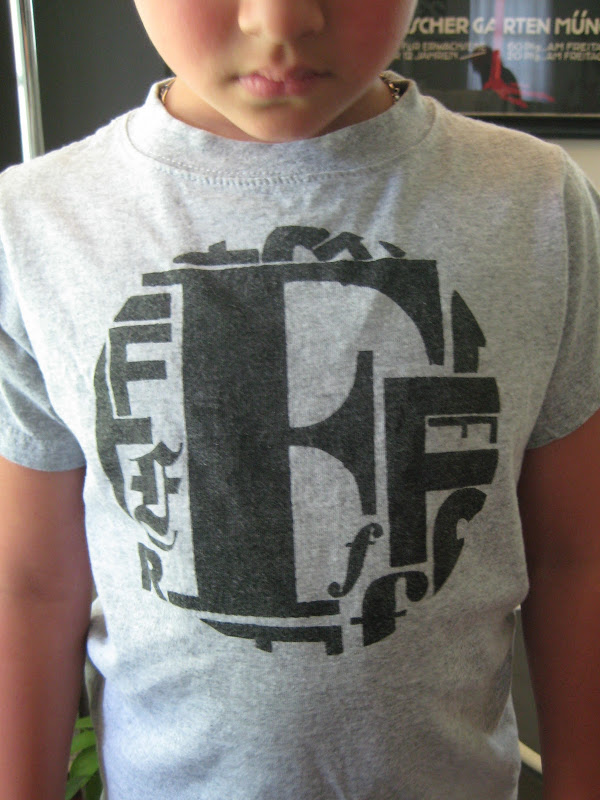 I wasn’t able to get a picture of the girls, but these are the designs that I made: 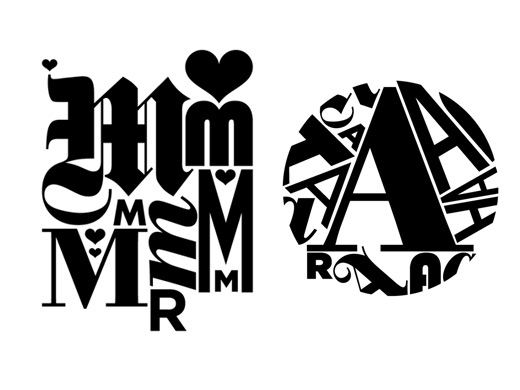 Hopefully, I’ll be able to get a shot of the girls in their shirts before they grow out of them!

Less than a week until the baby’s due date! Whether baby will be here on said date is the question on everyone’s minds. I think this waiting has to be the worst part of the pregnancy thus far. It’s maddening!

In the meantime, we’ve been trying to keep busy. I’ve had a few projects going because I get more and more restless as the days go by and I can’t seem to focus my energy on just one thing. 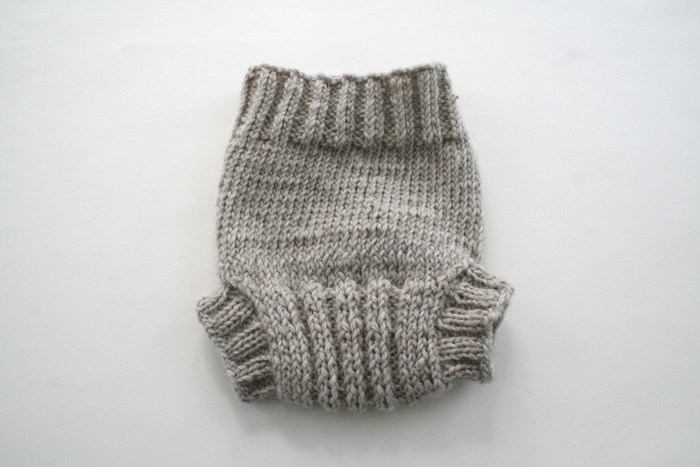 I just finished this knitting project a couple days ago, the Vanilla diaper cover, designed by knitter Kelly Brooker. I found the pattern on Ravelry (and if you are a knitter or crocheter and don’t have an account, I highly recommend signing up on this site). You can find a link to the Vanilla pattern, as well as others she has made, on the designer’s website, knit.so.quaint.

I love this pattern. Since I’m relatively new at knitting, I found that Kelly does an amazing job of breaking down the process step-by-step. Not once did I feel overwhelmed or discouraged by my lack of knitting knowledge and I actually ended up learning a ton. She also has instructions for multiple sizes and the pattern costs only about $6.00 for a pdf download. I used Lion’s Brand Yarn: Fisherman’s Wool in the color Oatmeal. I’m thinking of starting another one, you know, while we’re waiting! 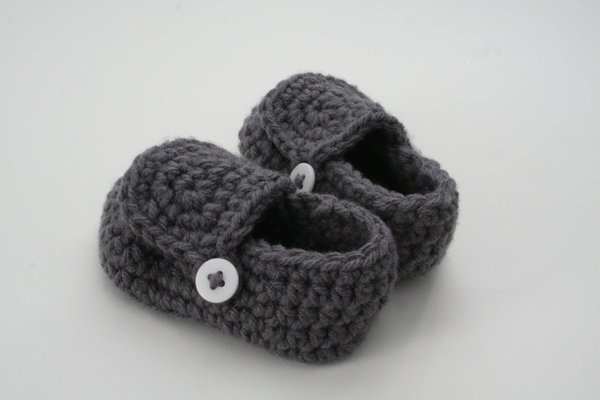 While cruising around Etsy a little while back I found a pattern for sale of these cute little booties! They are called Buccaneer Booties and were designed by Etsy seller Mamachee. The pattern comes in four different sizes from newborn to 18 months. I made these in the newborn size, but I don’t think they will fit the baby right away since I used some fat yarn and they came out bigger than the pattern intended. I’m going to try to make another pair with a lighter yarn and see how they turn out size-wise. 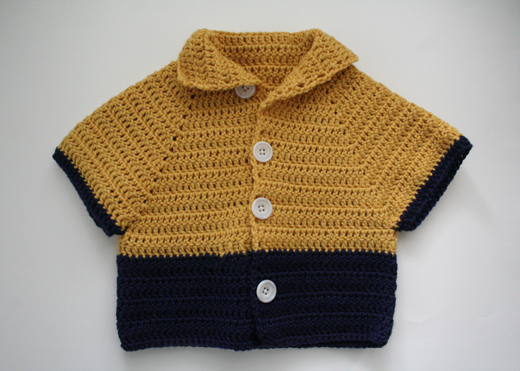 Baby sweater #2 is from this pattern called “Everyday is a New Sweater Day” that I found on the blog Yarny Days.

I changed it up a little bit because I think I messed up somewhere along the way and had to improvise. But it turned out ok. Instead of a long sleeve, it’s more of a 3/4 sleeve and more poncho looking than I think the pattern intended. I also put buttons down the front instead of just the two at the top and I also preferred it with the collar down instead of up. It just seemed like it might be too constricting around the neck.

I think I may eventually try this one again and try to do it the right way. But baby probably won’t be wearing this one for a little while since it’s sized for a 12 month old. So I have time! 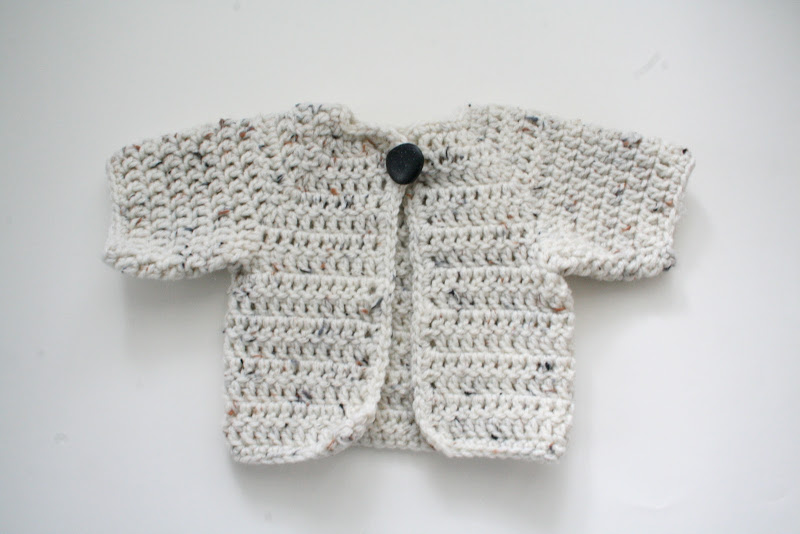 Up until recently I hadn’t yet ventured into crocheting any type of real clothing. I stuck mainly to scarves, bags, hats, Amigurumi animals, and now diaper covers. I don’t know when I will be ambitious and courageous enough to crochet a sweater for myself, but it seems that baby sweaters are the perfect way to start. For one thing, they are small so you don’t spend a million hours on something to find out that it is is downright terrible. And for another, baby doesn’t really care if it’s not perfect. The baby itself actually makes something so-so, into something really cute!

I made this sweater from a free pattern I found online. It’s for a newborn size and I think it turned out well. I have a stash of yarn that I feel obligated to use up before I buy new yarn (unless I have a project that calls for yarn that I don’t currently have) so this sweater isn’t made out of the softest stuff in the world, but I liked the color. And I love the button! 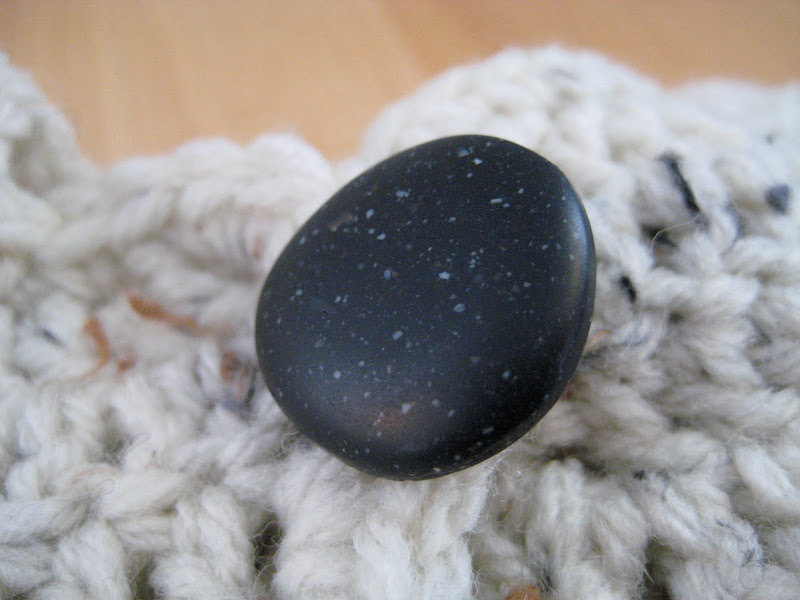 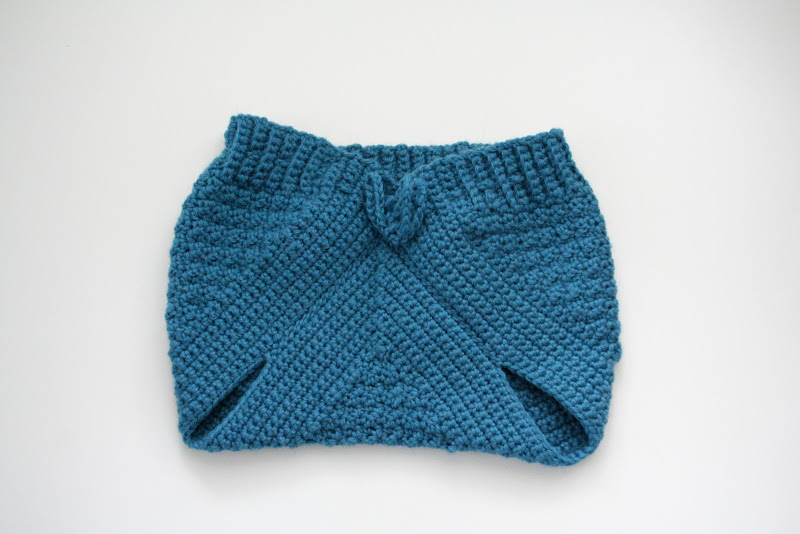 Before we even knew we were having a baby, we knew that if we were to have one we would use cloth diapers. We realize that it’s not for everyone, but for us, it just made sense. There are a few different styles of cloth diapers and you can read about them here.

We’ve been fortunate that many people bought us the fancy pocket Fuzzibunz diapers for our baby shower. But we are also preparing ourselves for having to use pre-folds just in case it turns out that 10 pocket diapers are not enough to keep up with baby’s needs. With pre-folds the diaper is separate from the diaper cover. Covers come in a few different materials from plastic to wool; wool being on the more attractive end (in my opinion), but also on the more expensive end.

Luckily, there are many tutorials online for making your own wool diaper covers. I tried a couple different versions and plan on trying more if it turns out that we need more. The two patterns I tried were this one for a crocheted wool diaper cover (also called a soaker) and this one for a wool felted version made from recycled wool sweaters. 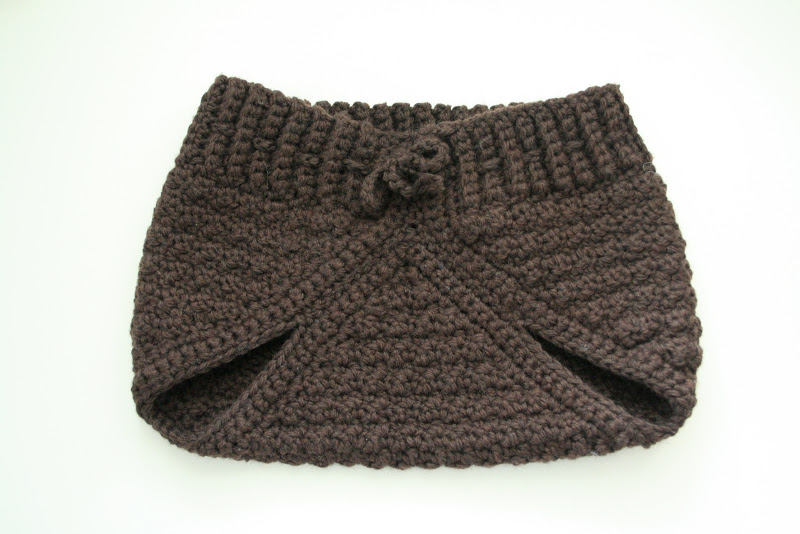 The crocheted ones look a little different from one another because I changed the pattern on the blue one (shown at the beginning of the post) to make it smaller. This brown one is made exactly as the pattern is written and I tried it on my 10 month old niece (she wears cloth diapers too) and it fit her perfect. The blue one might fit the baby after a couple months. 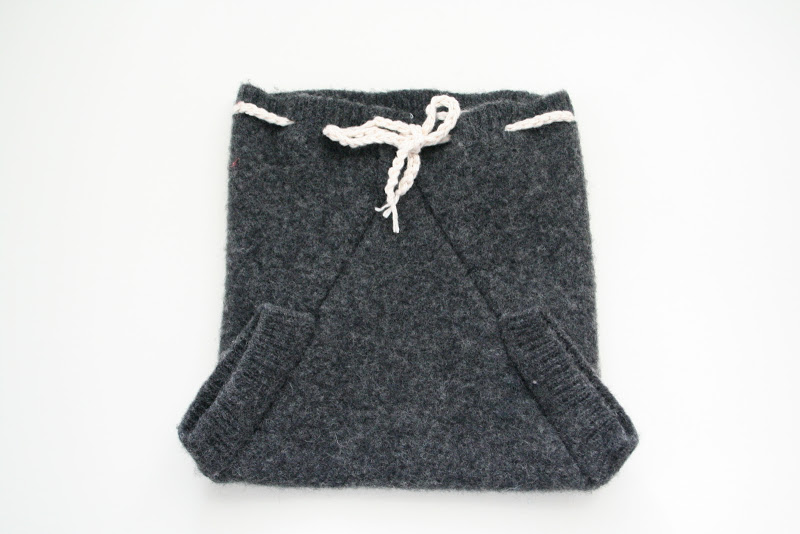 I made a bunch of recycled wool sweater covers because they are very, very simple to sew. (And a lot less time consuming than the crocheted ones.) This is just one pair that I happened to like the best. One thing I learned is that it helps if the wool isn’t too thick because it gets hard to sew and the cover turns out super bulky. The wrist bands of the sweater are used for the leg holes.