We got really lucky in this department with Q. He started sleeping through the night around three or four months. I have many friends and relatives with kids so I know this is not always the norm and something to be envied. So much so, that people give you the side-eye when you tell them that your baby sleeps through the night. I totally understand.

During those first few weeks I really understood why sleep deprivation is a form of torture. I was dead on my feet much of the time. But after awhile, the human mind and body really shows what it’s made of! By the end of those first four months I was able to sit up in bed at 3am, wide-eyed, and not be tired at all. And not only that, but I could function normally during the day on only four hours of sleep! Take that college days!

Last night, Q had one of his rare bad nights and ended up in our bed around 5 a.m. only to whine, and toss and turn and chew on my shirt, and smear his snot all over my pillow until 7 a.m.! It really made me appreciate that, in general, he is a really good sleeper. However, all those super awake-on-4-hours-of-sleep powers that I gained during those first few months pretty much disappeared after he started to sleep through the night.

So, since we’re on the topic of sleeping, I’m hoping to get better pictures of Q’s crib soon so I can post those. Made with love by his Papa! Here is a sneak peek: 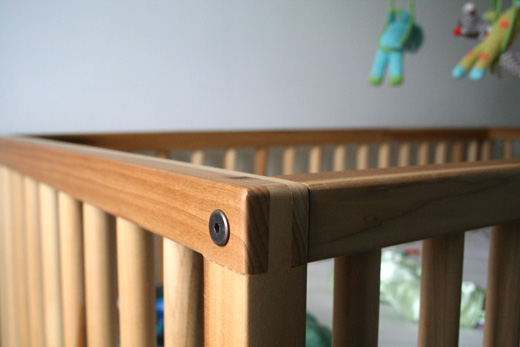