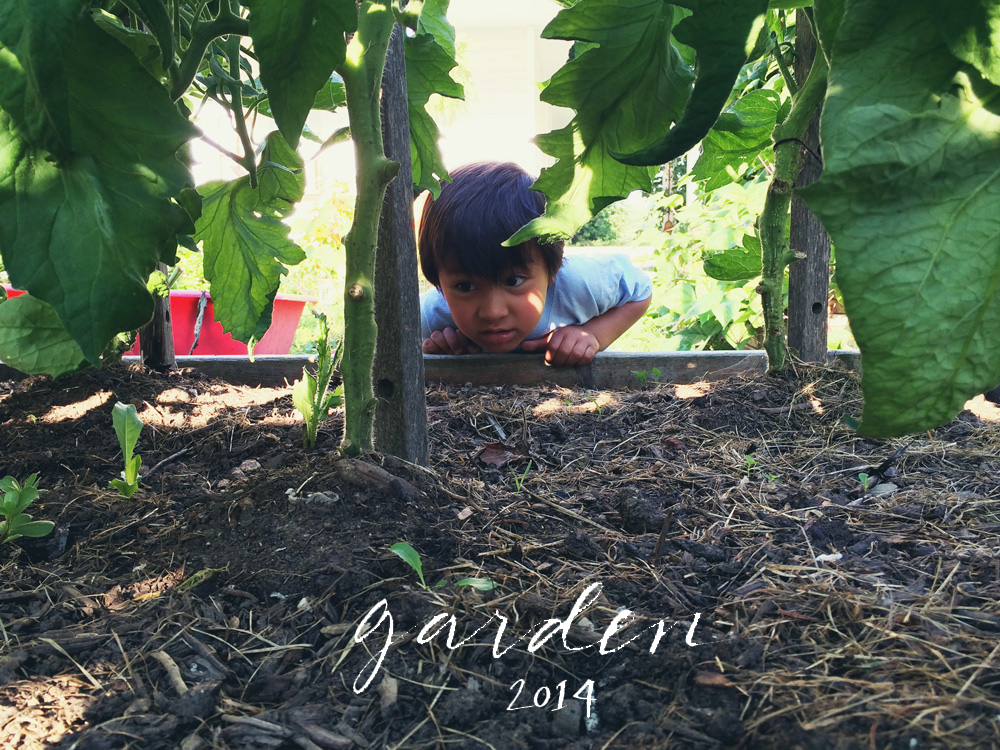 I realized the other day, I haven’t done a garden post in awhile. It’s getting lush and green and everything is exploding but not much bounty yet, with the exception of strawberries, salad greens, kale and spinach.

I feel like everything is a bit behind this year. But I also have a feeling this might be a long summer. No scientific proof behind that claim, just something that I feel. I could totally be wrong though.

Last year we got an offshoot of my Dad’s thornless blackberry bush and planted it in our garden. It’s pretty amazing how fast these things grow. We had to put up a trellis this year since it was getting out of hand. 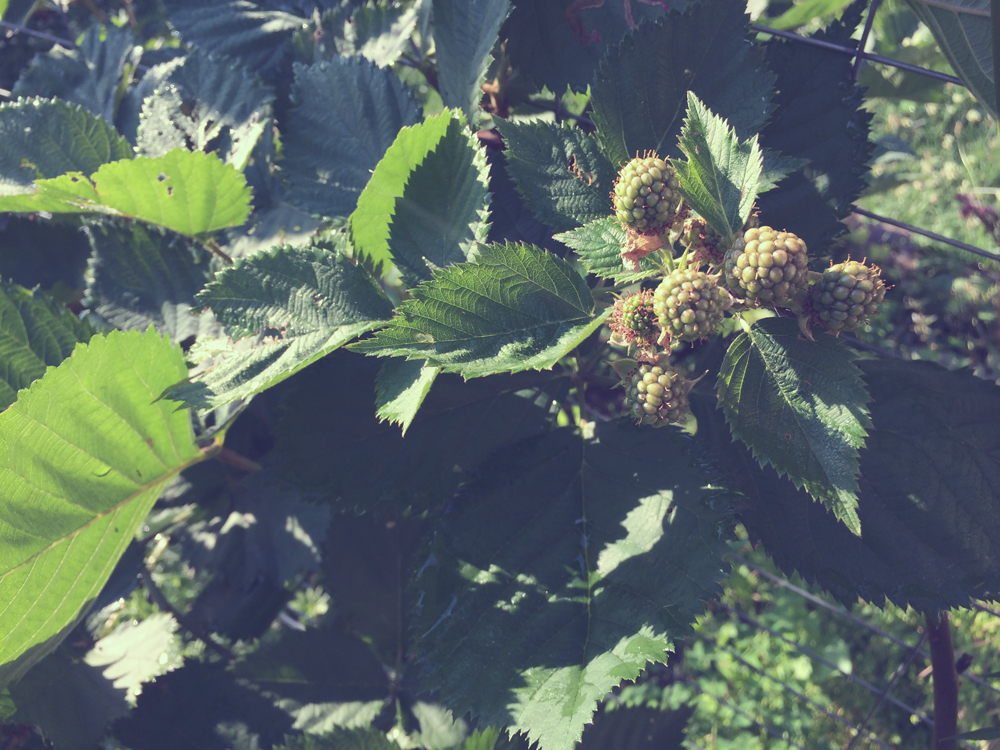 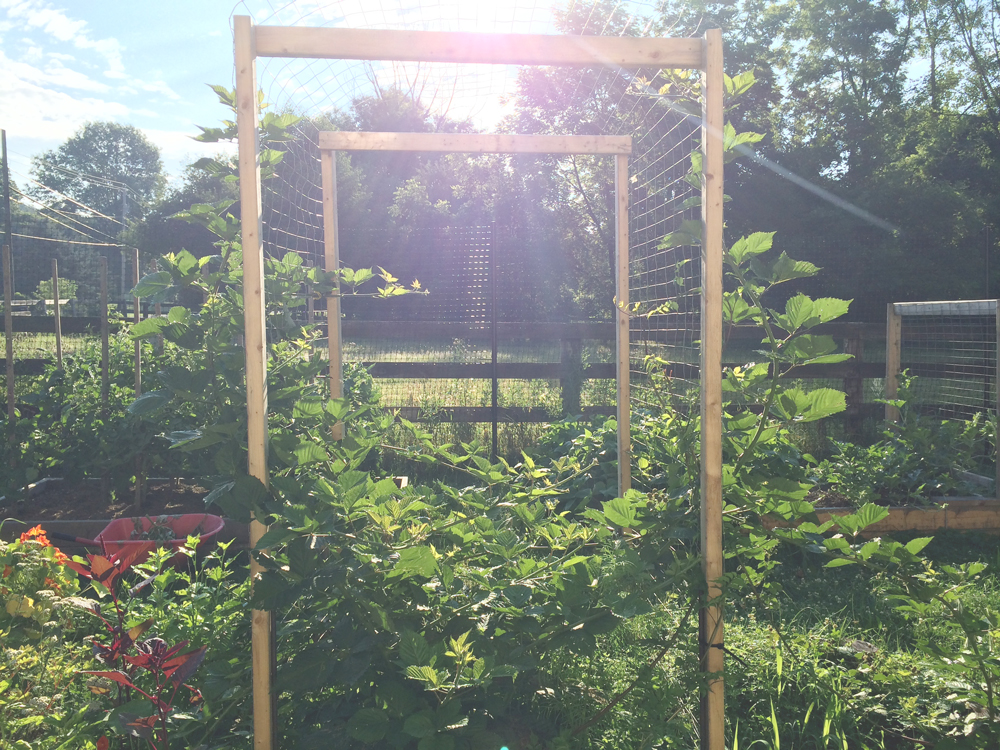 This year we planted Organic Non-GMO Blue Coco Pole Beans rather than just green beans, since Quil’s a fan of anything purple. The bean trellis Andrew built last year is still going strong. 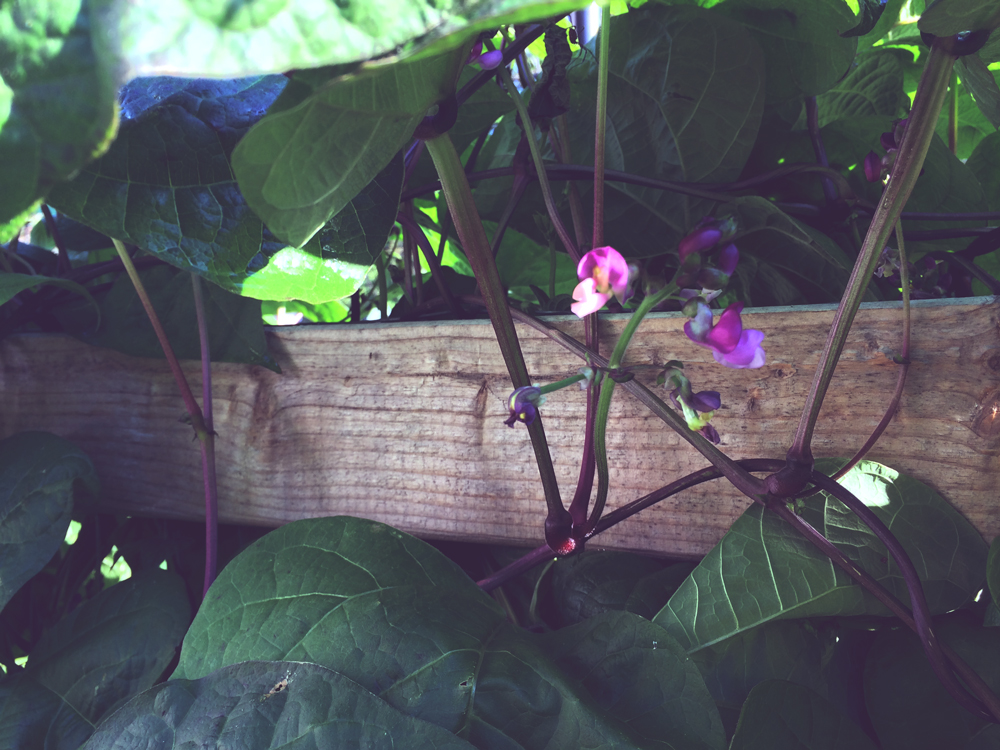 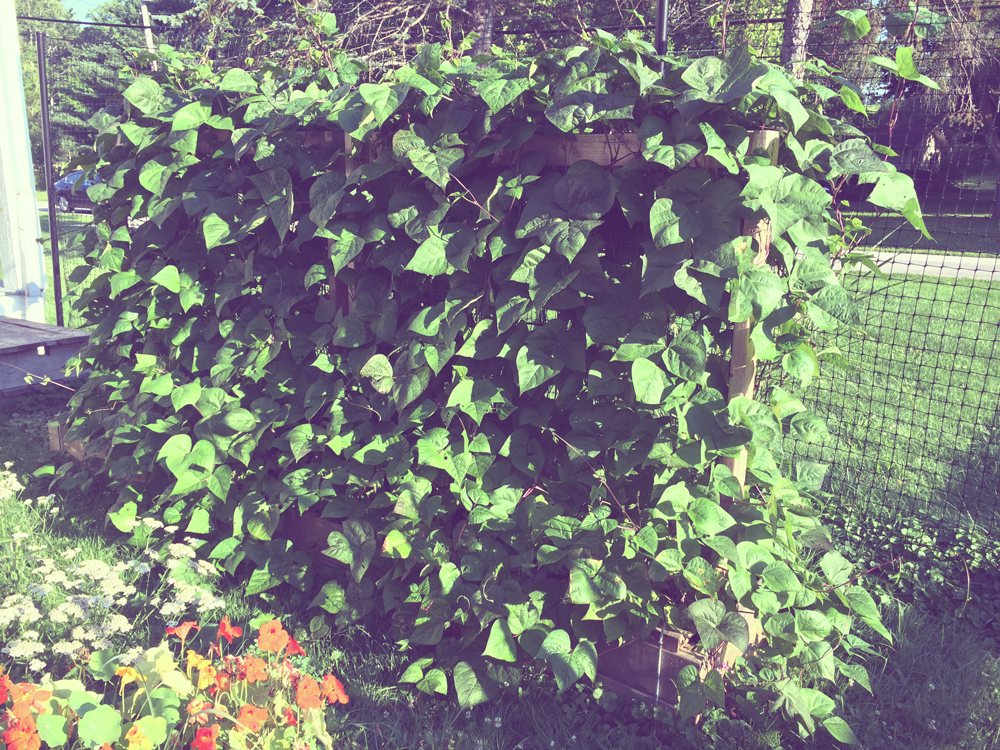 This round of salad greens is about done and gone to seed. You can barely see it compared to our grass that desperately needs to be mowed. I’ll need to rip them up soon and plant a new batch of greens, if the weather stays cool like it’s been. The spinach is coming up nicely, but something has been eating it. Haven’t had time to investigate. 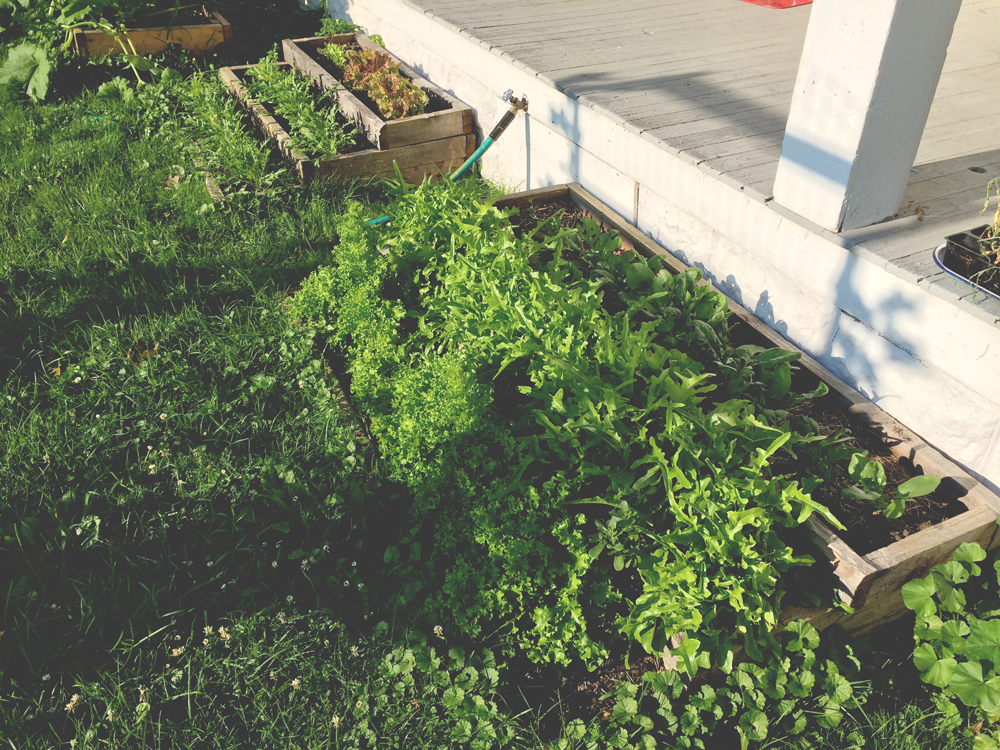 Our watermelons are coming along nicely, though I’m hoping the season holds out long enough for them to ripen. These also got a bit of a slow start since it’s been on the cooler side. Melons love the heat, so I had to put the seedling under cloches earlier in the season because they didn’t seem to be taking off. It really helped. 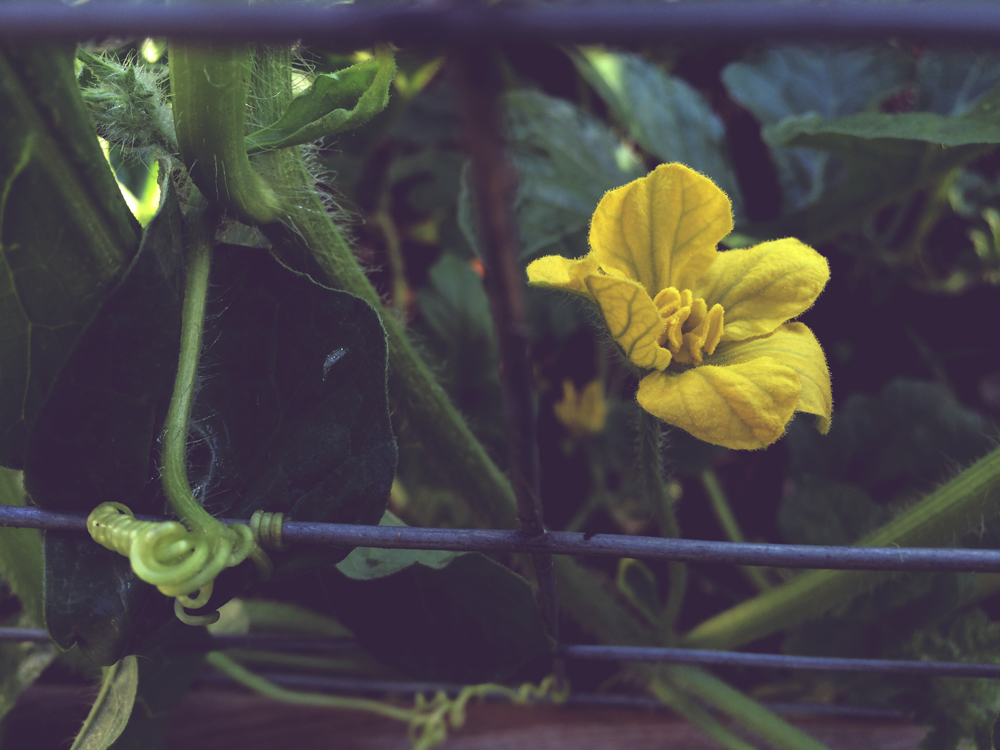 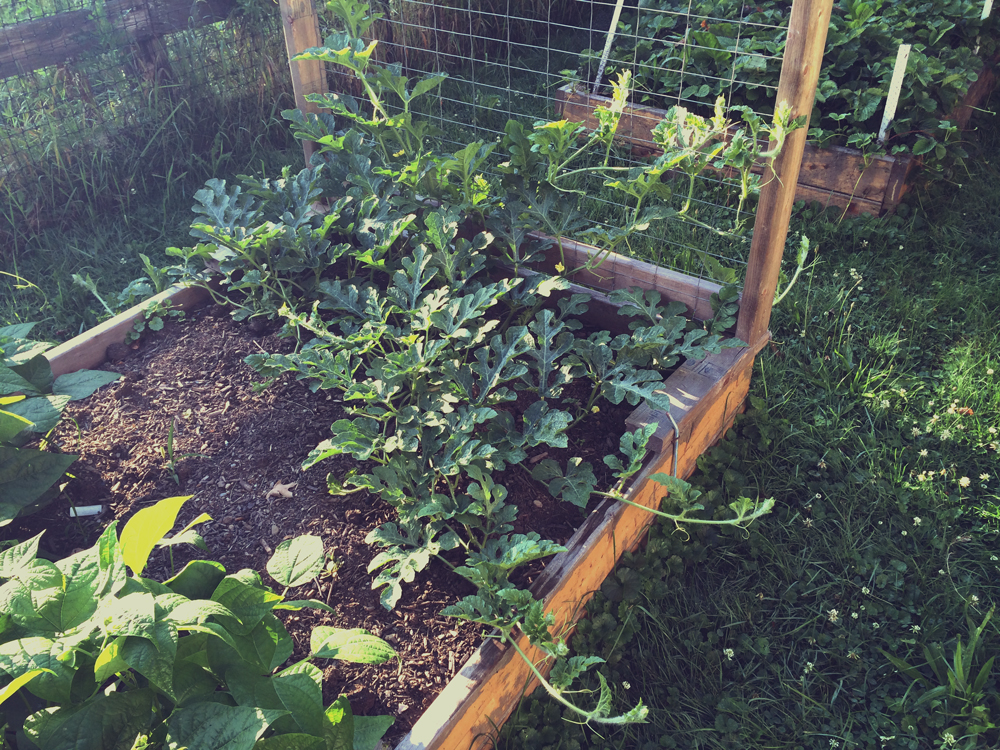 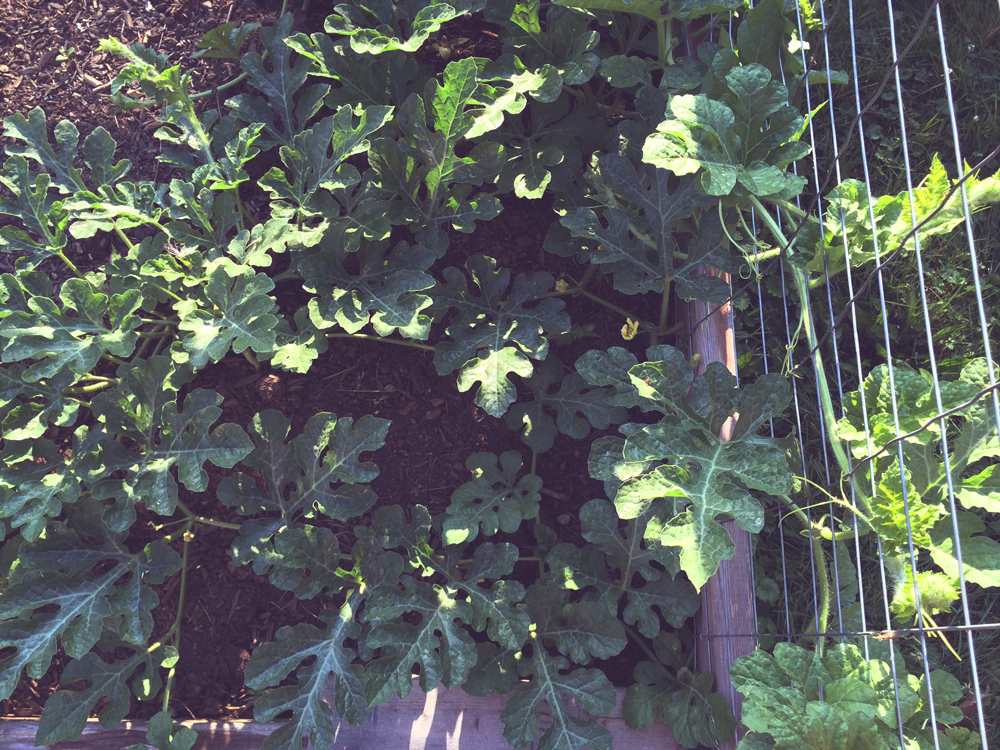 We repotted the fig tree this year to a bigger pot since it seemed like it was getting a bit crowded. I need to look into how to prune this thing. It doesn’t seem like it’s the right shape, with all the leaves at the end of long bare branches. I know nothing about pruning fig trees, so I’m nervous to even try. But the tree already has a bunch of figs, so it seems to be producing okay in its unpruned state. 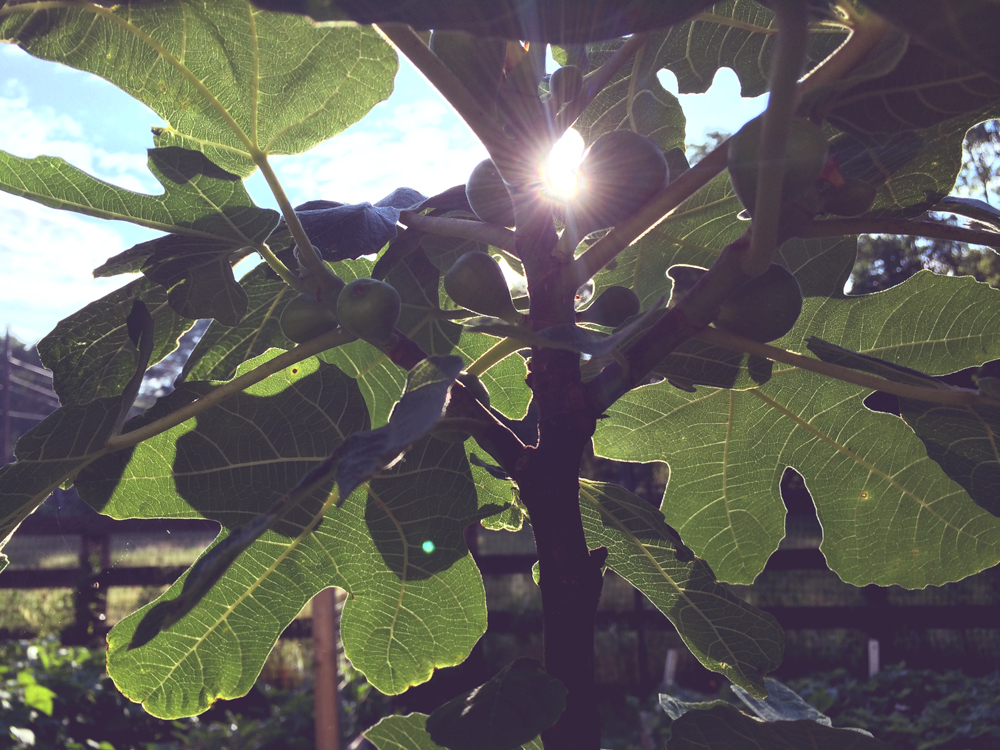 We tried something a tiny bit different this year with the squash/pumpkin trellis. Instead of having the trellis behind the bed, we have it going over the bed so the vines can grow through and up the fencing. We did this so that the fruit has more support as they grow. So far, so good. 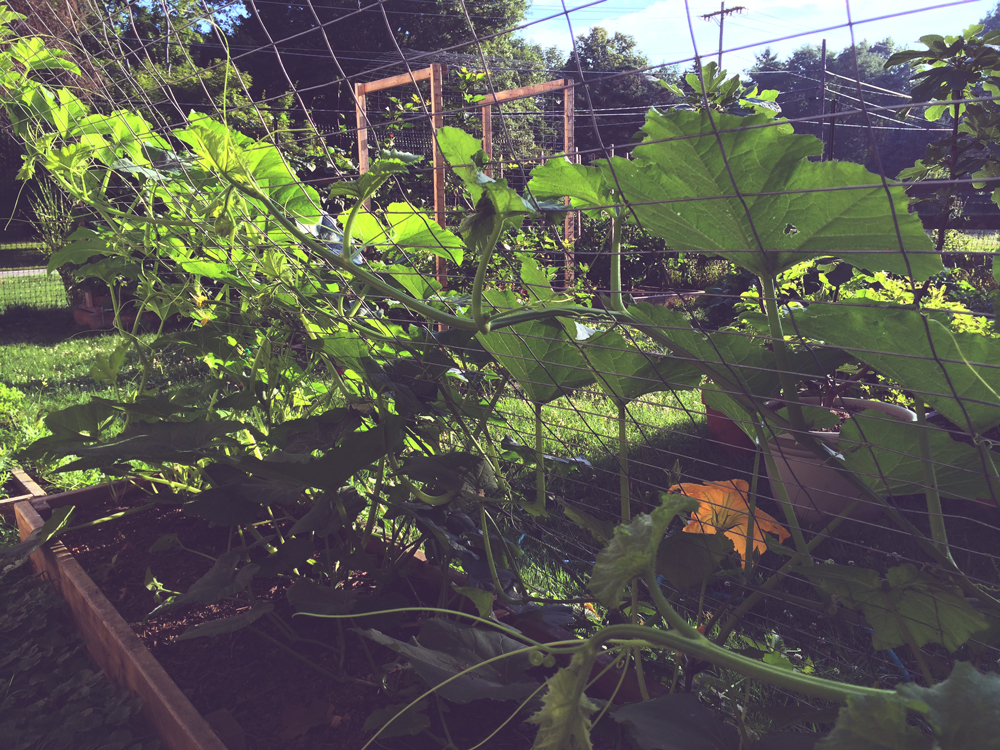 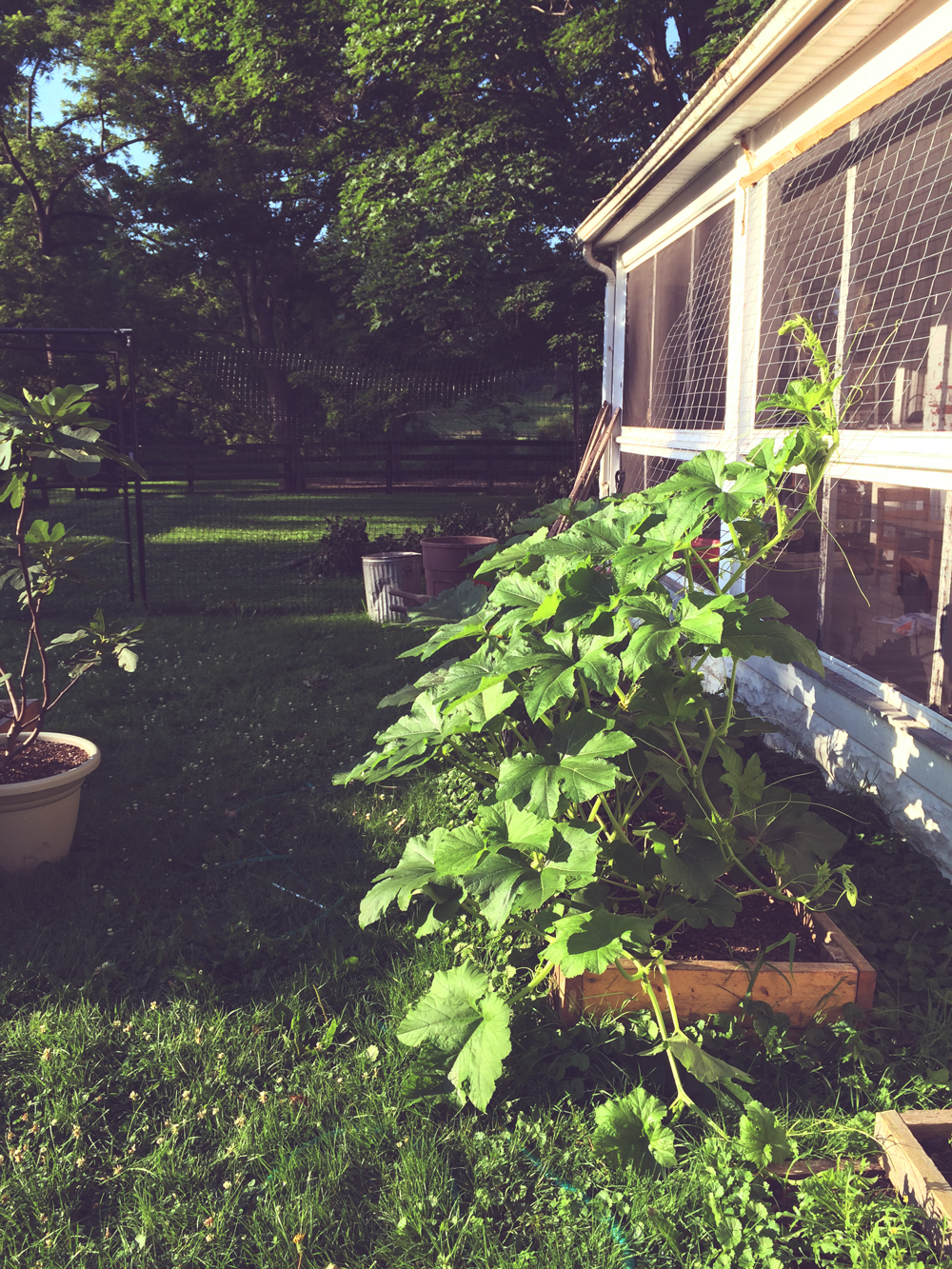 Tomatoes from seed surprise me every year. When I put the seedlings in the ground, they were so tiny and I was sure they weren’t going to make it. Now, they are huge with the thickest sturdiest stems I’ve ever seen. No fruit yet, but they are getting there. Every year, I realize more and more how much I love pruning and tending tomatoes. I feel like Mr. Miyagi and his bonzai trees. 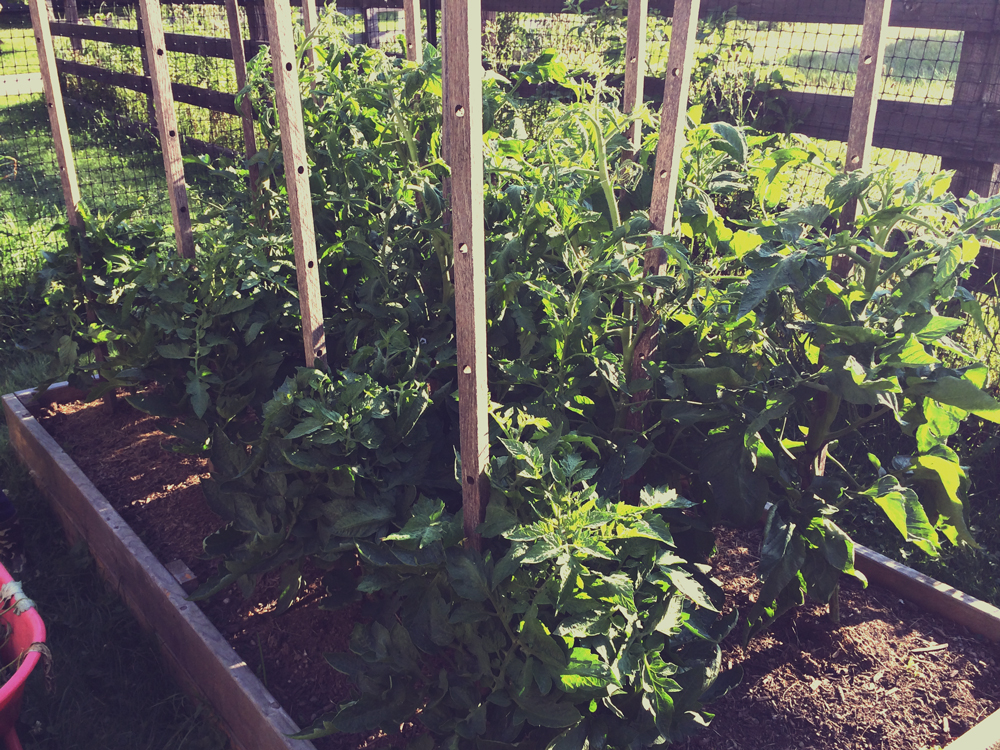 This is only our second time planting beans for drying. This year we planted Organic Non-GMO Black Turtle Dry Beans. Similar to the pole beans we planted this year, these have little purple flowers. Excited to see how these turn out. 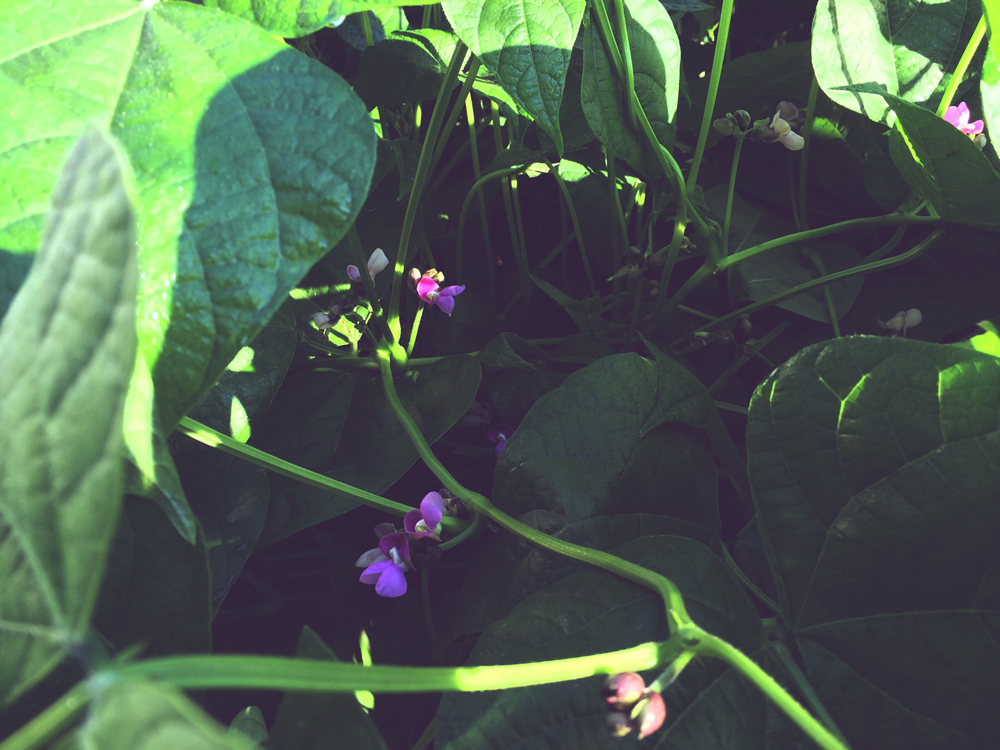 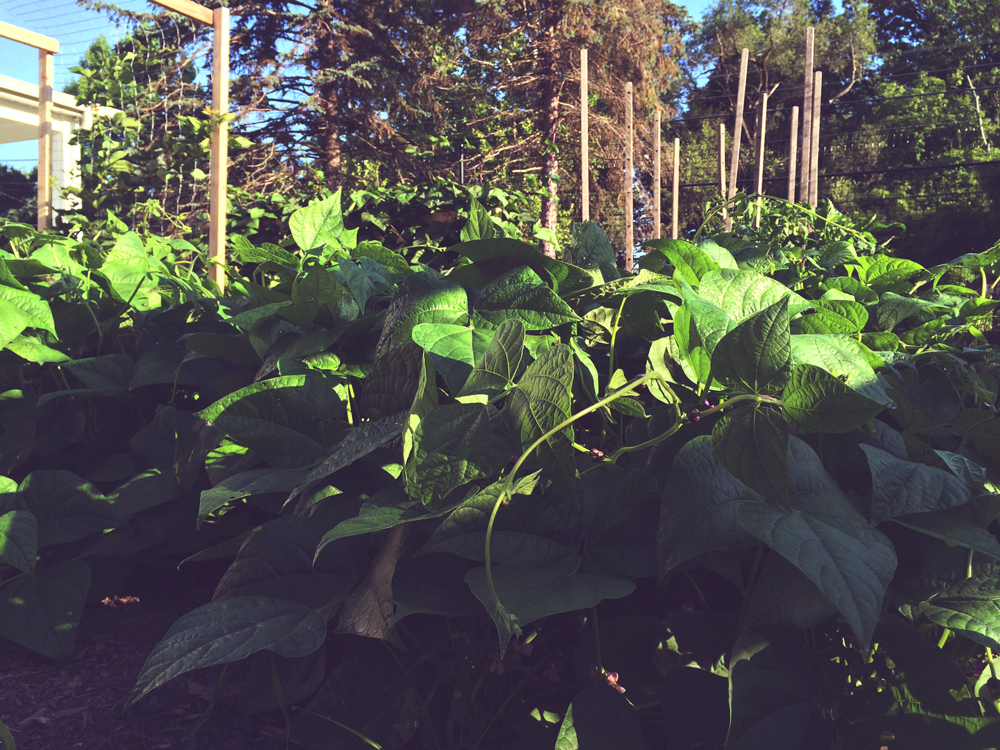 I just noticed the other day the kale has been hit by cabbage works again. I’ve been harvesting these leaves for a little while and they are great. Very mild and soft. Great in stir fries and veggie scrambles, and the young leaves are tender enough to eat in a salad. Will have to take care of those cabbage worms before they decimate the crop. As for our carrots (the straw covered row), I’m not sure what happened this year but they just wouldn’t sprout. There are a couple that made it through, but that’s it. Totally disappointing. 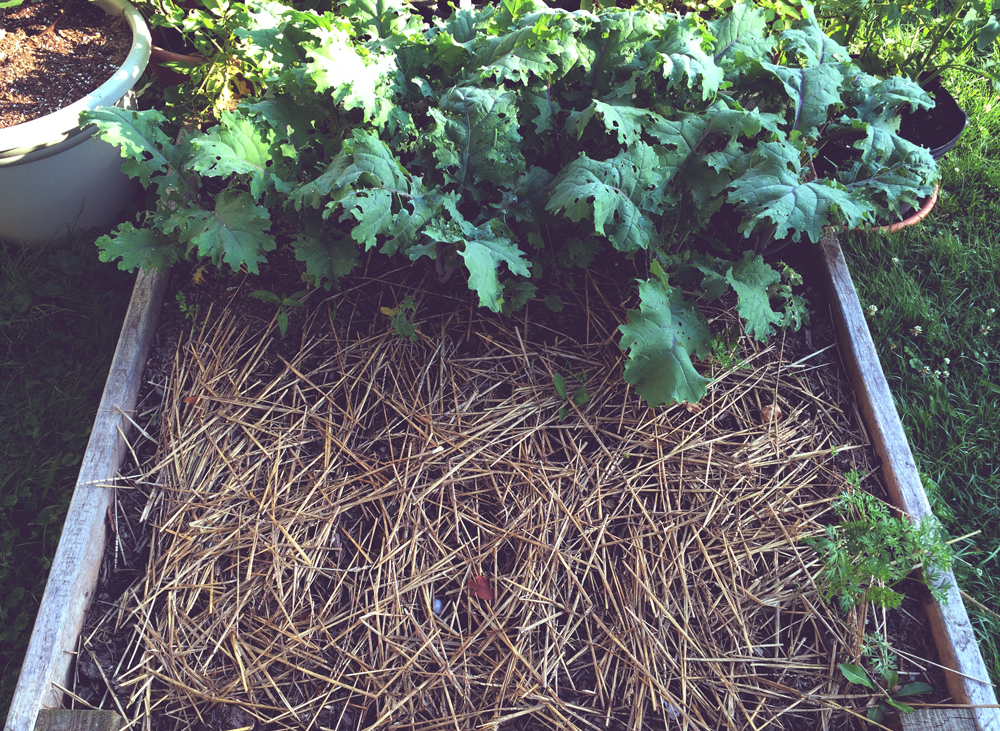 I have yet to dig around in the potato bins yet. Mainly because I can’t eat potatoes on the Whole30, but also I only noticed a few flowers on a couple of the plants and that’s it. Flowers are a sign that tubers are growing under the soil. So I’m wondering if we got any potatoes this year. It was a bit of a crap shoot since these things were mega sprouted before we put them in the ground since our storage wasn’t great. I guess we’ll just have to dig some up and see. 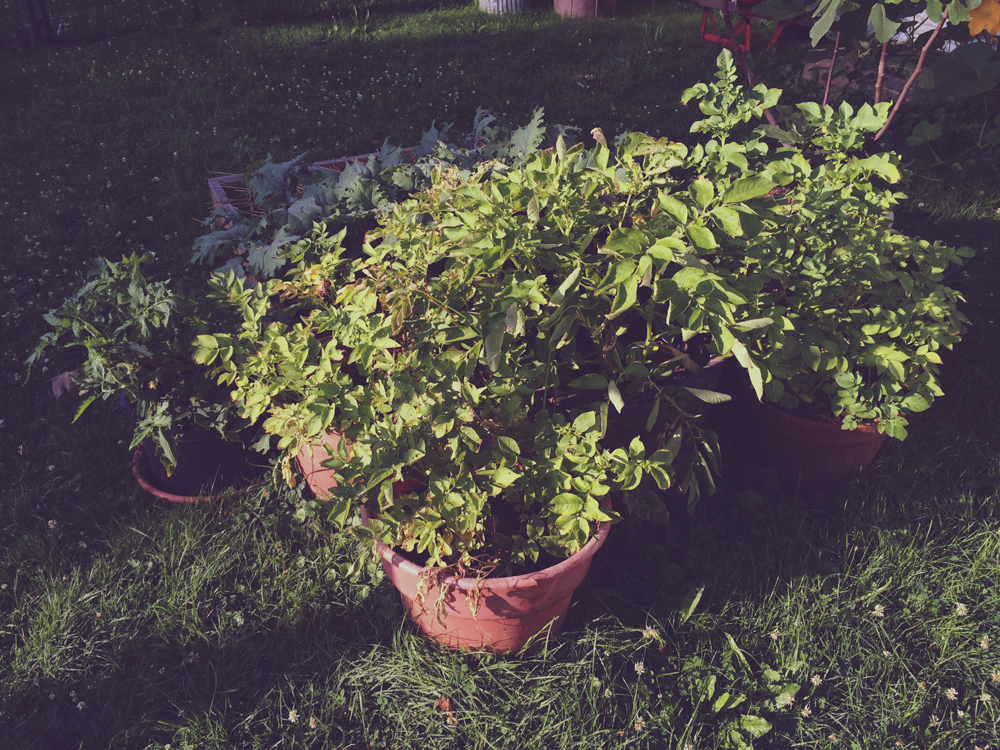 Will hopefully have some more photos of our harvest in the future!